The decision of the GST Council in its 47th Meeting held last week in Chandigarh to impose 5% GST on dairy items like “pre- packed, pre-labelled curd, lassi and butter milk” and to increase GST on dairy machinery and milking machines from 12% to 18% has drawn criticism from farmers’ organisations and milk cooperatives. Various cooperatives are waiting for the notification of the Centre to take the next step, while farmers fear that the decision will result in increase in the price of the by-products.

R.S. Sodhi, Managing Director, Gujarat Cooperative Milk Marketing Federation Ltd (GCMMF) (Amul) said they are waiting for the notification. “We do not have any clarity at the moment. We have seen newspaper reports that GST will be levied on curd and buttermilk. We are waiting for the notification,” he said, adding that the prices of both the products likely to rise if GST is imposed on them.

The increase in the GST on dairy machinery and milking machines will have a direct impact on the price of milk too. Pradeshik Cooperative Dairy Federation (PCDF) of Uttar Pradesh, the largest milk producing State in the country, will also meet soon to assess the impact of GST on the by-products and the machinery.

“The impact of this will be on the consumers as prices will increase. We have to assess the impact. We will consult with all district unions of farmers and will approach the government after that,” said PCDF general manager Tapesh Yadav.

All India Kisan Sabha’s (AIKS) leader from Western Uttar Pradesh D.P. Singh said the decision will affect farmers directly. “There are a lot of farmers who make curd and buttermilk at their homes and sell it in their neighbourhoods. Such a taxation will affect their livelihood,” Singh said. Farmers’ leader from Shamli Jitender Singh Hudda said decision to increase GST on milking machines will impact the mechanisation of milking processes. “This will further increase the input cost. The government should also think about nutritional requirements of people,” Hudda said.

AIKS leaders Hannan Mollah and Ashok Dhawale said in a statement that the move will adversely affect over nine crore Indian households depending on the dairy sector for their livelihoods and millions of poor consumers who depend on milk and its by-products for nutrition. “Livelihoods of dairy farmers will be threatened and the move to impose high GST on Dairy machinery will hit the small players and especially the cooperative sector. The BJP Government is crushing the rights of States and we are witnessing a centralisation of political authority and capital,” they said.

The AIKS said the GST regime in the last five years has led to fiscal policies that favour the class interests of finance and monopoly houses at the cost of poor peasants and small entrepreneurs. “Recent reports about the impact of the GST regime in Howrah’s foundry industry and Surat’s textile industry clearly demonstrated a consolidation of big players at the cost of medium, small and marginal players in different levels of value chains. The medium and small players either had to exit the business or merge with the bigger players. There are several similar examples from different parts of the country where there was the consolidation of bigger players and the ruin of small players,” Mollah and Dhawale said and urged the Centre to immediately withdraw the recommendations of the GST Council.

The AIKS also called upon dairy farmers across the country to rise in protest by uniting the small entrepreneurs and cooperative sector. 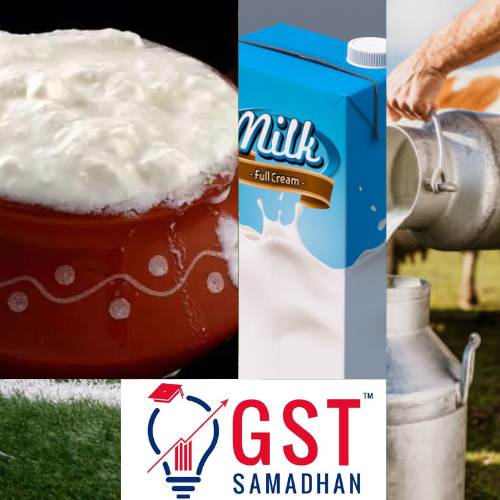